Each year, wild pigs cause approximately $150 million in damage in Georgia and over $2.5 billion in damage nationwide. They are well established in the state and throughout the Southeast.

Wild pigs have the greatest reproductive potential of any animal their size on the planet. Sows are capable of breeding as young as 4-6 months of age. They can have two litters per year and litters average 4-6 piglets. Sows are very protective of piglets and juvenile survival may be as high as 90%.

Wild pigs have no significant natural predators. They rarely exceed 300 pounds in size – most adults weigh in the 125-200 pound range. Wild pigs are habitat generalists and eat almost everything they can catch or find. These characteristics lend themselves to rapid population growth, and areas with just a few pigs are sure to have many pigs in a short period of time in the absence aggressive population control measures. Wild pigs can harbor over 30 parasites and diseases – many are transmissible to humans, pets, and domestic livestock.

Wild pigs are one of the world’s top 100 worst invasive species. 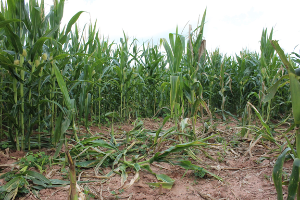 The Warnell School of Forestry & Natural Resources and The Jones Center at Ichauway are two of several partners collaborating on an NRCS-funded grant to the Flint River Soil and Water Conservation District to evaluate wild pig control efforts as implemented by USDA Wildlife Services. Dr. Mike Mengak at UGA and the Wildlife and Aquatic Labs at the Jones Center are working together to study effectiveness of wild pig control methods and to quantify benefits of wild pig control on native wildlife and their habitats, water quality, and agriculture production.

Mengak (Warnell) and Mike Conner (Jones Center) are co-advising master's student Justine Smith on this project. Warnell and the Jones Center scientists are also working closely with investigators at Tall Timbers Research Station on a similar pig control effort. Our plan is to use comparable sampling protocols on both sites such that we are better able to generalize results of pig control throughout the region. We will also be leading education and outreach efforts with landowners in the area to teach whole sounder, corral-style trapping as a best practice for effective long term control efforts.

Dr. Jim Beasley (Warnell) at the Savannah River Ecology Laboratory in Aiken, South Carolina, has a similar study and is working with Mengak and others on this large, multi-state wild pig project. 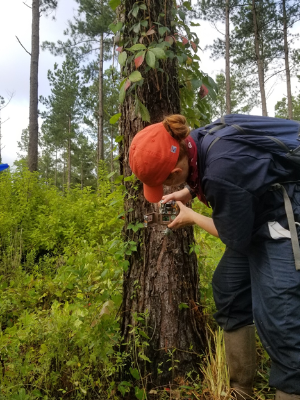 Due to issues associated with the COVID-19 pandemic, we were unable to start sampling as scheduled in the spring. However, as soon as the state allowed, Justine hit the ground running. She has all of her sampling gear in place with nearly 120 trail cameras deployed.

Our plan is to check these cameras and download images at least once each month. Her project will be data rich as her first month’s camera check yielded approximately 10,000 images! These images will be used to document wild pig decline as a result of control efforts implemented by USDA Wildlife Services. Trail camera sampling will take place continuously during the three-year project and will allow us to determine if pig control efforts have a positive impact on other species of wildlife.